Corn Salad to make me more regular and I've been banned from watching reality television. 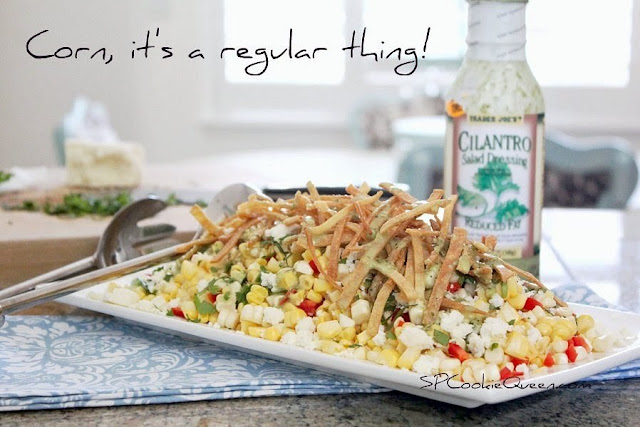 In my attempts to get more regular I've been fiddling with corn.  Here where I live besides being surrounded by acres of fruit orchards we have copious amounts of corn.  So when late summer rolls around I like to be sure and relieve the great amount of pressure that builds up from the excess supply.

Hot Dog Dude loves corn, hates pickles and olives but that is a story unto itself.  I try and move things along around here by incorporating lots of fresh corn into our diets this time of year.

I caught up on a huge amount of work that was plugging up our inner workings and so I've actually had a few extra minutes to lounge around in the evening and watch Hot Dog Dude watch television. You'd think he would appreciate my lovely company; but no.

He was watching one of his favorite shows, a group of middle aged wannabe gangsters who ride around in low-rider Caddies (how cliché) and try and persuade people to pay the rent (wink, wink).  I was trying to sit there and be seen but not heard, but I couldn't help myself the verbal diarrhea just started leaking out.  I started pointing out all the holes in the loosely written plot, "How did the cameraman get inside the room, if they distinctly told them to turn off the cameras?"  "If you said you were going to go rough someone up, why would you throw a television out of the window that was clearly from the 70's?"  I mean after all that is kind of doing them a favor, because flat screens have been out for at least a decade.  Then I discretely pointed out, "Dude, you are totally the demographic they are going for, can't you tell by the commercials."

Dude: You are banned from watching this with me.

The Queen (in her head): God I just want to thank you for that act of kindness you have bestowed upon me.

I did however make us a fantastic corn salad that I hoped would move us in the right direction.

Cut the tortillas in half and then in strips.  Fry till golden brown, sprinkle with salt while hot, and drain on paper towels.  I like to use a small pan for frying with an inch of oil of so, so I don't waste a bunch of it.

Mix the corn and bell pepper together and place in a bowl. I used a small platter to highlight a little verticality, but really it is your choice.  Sprinkle the top with cilantro, cotija cheese and the fried tortilla strips, drizzle the whole thing with dressing. I would go light on the dressing, that is just what I'd do, but seriously I don't go around telling people what to do.

Serves 4 as a side salad.