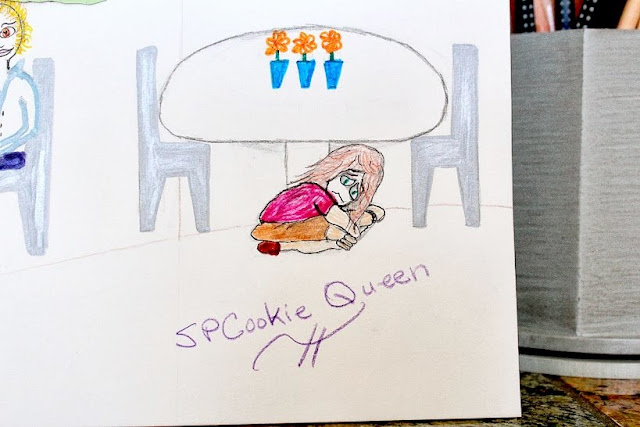 I’ve been seeing a therapist for a little problem I’ve acquired as a result of my food blogging habit.

At times I think this crazy habit of mine has been beneficial, at others I know it hasn’t and it causes me to slink away and curl up in the corner somewhere and let my four legged friends lick my wounds. Sometimes I think they really want to console me and other times I think they are just on the hunt for leftover cookie dough bits stuck on the far reaches of my limbs.

I really didn’t even know I had a problem until Hot Dog Dude came into the kitchen one evening and confronted me as I stood there like a deer in the headlights. “Are you looking at food again?” He demanded to know. I stood there frozen, incapable of a quick retort.  “I was checking the weather in Quebec because I might have to go there soon.” “What is your problem anyways is this because you forgot to put out the garbage and you are trying to pin that on me?”

I had no idea how hard it would be to find a therapist that specialized in this field. Apparently there is only one clinic in the area and it’s located in the back of a hipster restaurant in an up and coming neighborhood, featuring small overpriced plates, complete with a master mixologist and a water sommelier, but it did come highly recommended on Yelp, so I thought I’d give it a try.

The initial meeting with the therapist went well at least in my opinion. He gave me a little questionnaire to fill out, while I noshed on a few tapas and some locally sourced organic wine to wash it down.

Not often at all. I strictly limit my viewing to once every 22 minutes or unless I get a Google Alert that a new recipe has been written I’ve never seen before, well then I need to check immediately.

2.  What is something your significant other could do to get you in the mood?

I was thinking if he could stand there in front of the window shirtless holding a small plate with a single cupcake with mile-high swirled frosting, homemade sprinkles, edible glitter, wrapped in a handmade paper wrapper, perched squarely in front of his chest with both arms out... Scratch that I just got a visual of his chest hair casting a shadow on the cupcake and that just totally ruined it for me.

Dark. What kind of sycophant are you anyways?

Of course not. Besides my family is lucky; they never have to risk damaging their sensitive palates with scalding food while I spend 45 minutes to an hour photographing their dinner. I’m doing them a favor; they really should appreciate me more. (Matter of fact, not to self; send self flowers and thank you card.)

5.  Would you frequent an establishment with so-so food, but superior natural lighting?

No never. Okay, fine there was that one time. Screw it. Have you been following me or something? Maybe you are the one with the problem?

6.  Have you ever rearranged a restaurant meal because it wasn’t up to your styling standards?

I can over look a lot, but come on I think we all know that parsley sprinkled around the rim of a plate is as passé as that pig tattoo on the chef’s forearm. Besides, it’s not like I'm bringing my tweezers and styling kit with me when I eat out, it’s just in my car in case I am called to a styling emergency.

I’m not going to answer this. I don’t know where you are going with this questioning any ways. Are you going to sit there and tell me you don’t have designated plates for each day of the year and each meal that goes along with them, including random vintage cutlery and glassware.


After going over my questionnaire the therapist decided I would probably do well in the group that meets on Thursday evenings to the sounds of soothing Jazz.

I was hoping to make some new friends so I arrived with a plate of warm cookies to share with the group. That is when the complete cluster fudge-pop broke out; I hid under a table for my safety. It was so crazy I thought perhaps only a drawing could do it justice. 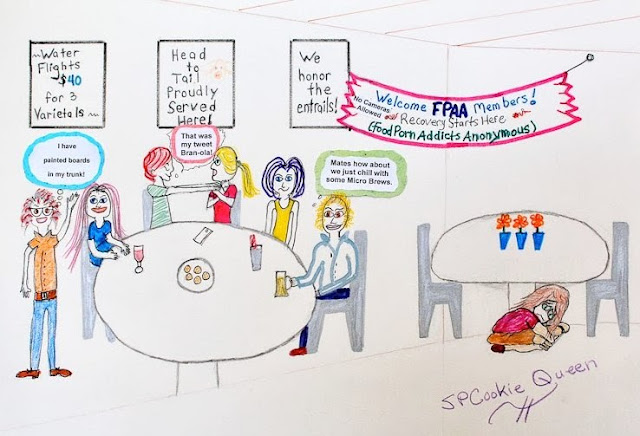