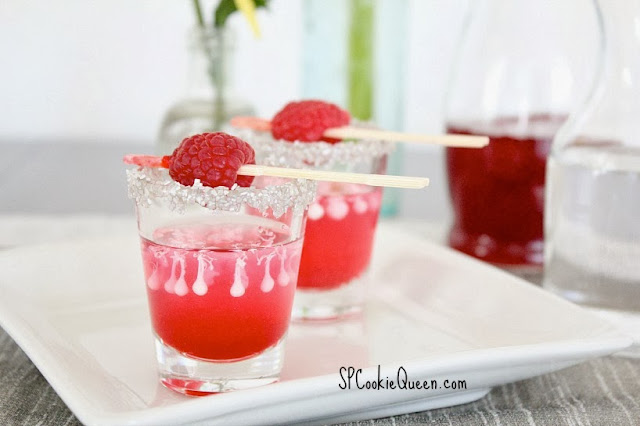 Hoping all of you had a Merry Christmas, Happy Holidays or a stress less end of the year. I know what you guys are thinking, what the heck Gina were you on the lamb in the witness protection program or something. Close, but I can assure you it had nothing to do with the time Hot Dog Dude had to do some concrete work inside a mortuary with dead bodies on the tables. Nothing at all with that, I repeat.

I think my absence was more closely correlated with the fact I was suffering from exhaustion, stress overload, and let’s just throw in some depression for good measure. Any normal holiday season leaves me feeling depleted but this one in particular felt like an epic wave came in, crashed down and held me under. I’d say it was the same as being on a cruise ship sailing around Europe and the only thing you remember is spending your days hunched over the railing puking your guts out.  Or at least with the luck I've had this year that is what would be my fortune.

I plowed my way through the last few months, made over a thousand Christmas cookies, decorated the tree, shopped till I dropped, made multiple elaborate meals. Yet there was this black cloud following me around all season. I thought if I kept myself busy every minute of every day I could keep it at bay. But that cloud busted down the door, barged in and wouldn’t fricking leave. Talk about your uninvited house guest.

I feel I somehow need to apologize to any of you who had the misfortune of spending time with me this holiday season, because the alien who took over my body (probably sucked out my brain too) was a real fun sucker.

On the flip side though, I’ve decided to show that grump-a-lumpagus the flipping door.  Plus I did kind of need the mental vacation to sort out some things and make some new plans for the future. I've always felt conflicted because I can be extroverted at times and at others introverted. I always feel like there is an epic struggle going on so that one of these two doesn’t take over. Oh crap, maybe there are other personalities in there also.  Wait, does that make me Sybil?

I say we just have a toast to the New Year and forget the last one ever happened. That and have snacks and probably some B-1 shots so I can get my energy back up to make yet another Christmas (Pig Palooza) on Monday. 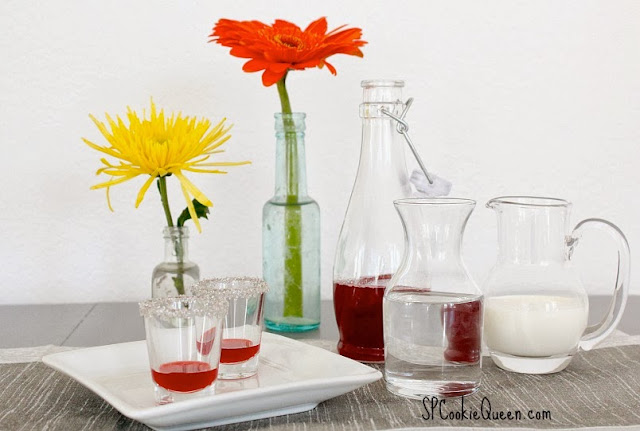 Run a lemon wedge around the rim of your shot glasses and dip in sparkling sugar and set aside to dry. (If your year was like mine, don't be skimpy and get plenty of glasses lined up.)

In a small saucepan bring raspberries, water, and sugar to a boil and let boil for 8-10 minutes until berries are soft and the liquid is reduced a little. Take off heat and let cool. Strain through a fine sieve and pour into a container for serving.

First pour a couple tablespoons raspberry syrup in your glasses. This is where you can use your complete discretion, I’m an alky light so I usually go half syrup and half booze or I’m passed out on the floor by 9 p.m., but if you just want a splash of syrup with your alcohol, that’s cool too.

Use a small spoon and pour the alcohol over the syrup. Top the drink with the heavy cream, use a small pitcher and pour a small amount over the top. (I used a dropper and dropped the cream on top for that cool suspended effect.)  Garnish with some more fresh raspberries if you’d like, they can also double as swizzle sticks.

I hope you know I hate wasting anything, so the day I experimented with these I had to drink all the leftovers and I must say it wasn’t so bad of a day after all. 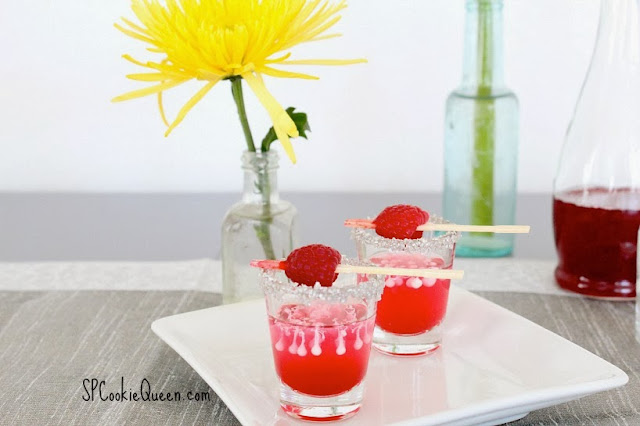 Cheers to 2014!  (I was going to light the drinks on fire and burn them in effigy of 2013, but I thought that was a bit too melodramatic even for me.)