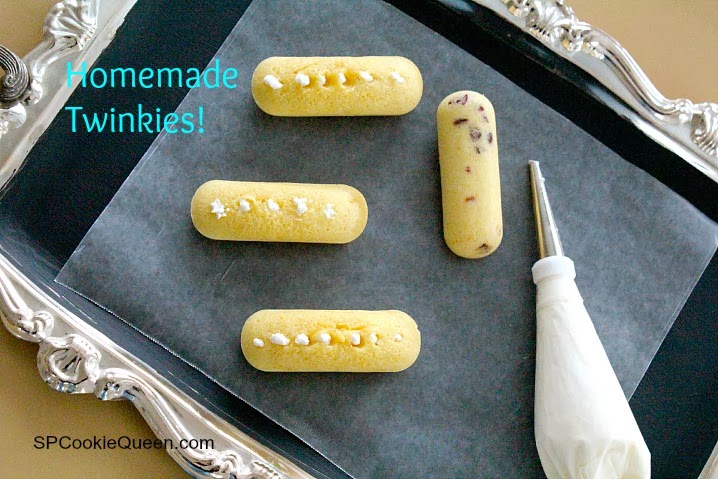 I was so excited when I spied a Twinkie pan at my local craft store the other day; I came home and couldn't concentrate on work because I had Twinkies on the brain.  I have to admit to being behind the curve on some trends.  When I saw the news that Hostess wasn't going to be making the Twinkie anymore, my first thought was, "They still make Twinkies?"  Not that I didn't consume my fair share of Twinkies over the years, it's just that it was years ago.

Twinkies and the memory of my best friend are completely intertwined.  I had a funny story in mind,  but I've had a lump in my throat I can't shake.  I put a picture up of what I was working on for you guys the other day and when I went to respond to some comments I was stopped in my tracks by some very sad news that we had lost a blogging friend Elle from Elle's New England Kitchen.  Elle had friended me through Facebook early on and I enjoyed her spirited sense of humor and her beautiful beaded jewelry she was always working on.  She had these corgis that she loved sharing pictures of which always made me smile.

I have had my unfair share of experience with these types of things the last few years, and I really feel for her family and the grief they are going to go through.  I just want them to know Elle will be missed.

I had a hard time finding the right recipe to make Twinkies, I found quite a few that used shortening, cake mix or marshmallow cream in them.  If you are going to make something and call it homemade I think it deserves better ingredients than that or I would just buy them made, or at least that is my pet peeve.  So I set about on a "Tweak the Twinkie" mission.

Preheat the oven to 350 degrees F.

Spray the pan with no-stick spray.  I bought the Twinkie shaped pan at my local craft store it is a Wilton brand, but I'm sure if you looked online there are more options.

Sift together cake flour, baking powder, and salt.  Set aside.

In the bowl of a mixer add the three egg whites and whip on high speed until stiff peaks are starting to form. Transfer the whites to another bowl and put the bowl back on the mixer.

My daughter insisted I keep half of them vanilla, but I needed a little more zing from my Twinkies so I poured half of the batter in another bowl and mixed in the following ingredients.

Pour the batter into each hole about 1/2 full.  You should get six vanilla and six lemon-strawberry Twinkies. If you want, you can increase the amount of lemon juice a little and up the strawberries and do all twelve that way.

Bake for 7-9 minutes, until they are just set.  You don't want to over bake them or the will dry out fast.  Let cool on a rack.

In the bowl of a mixer whip the heavy cream and sugar on high speed until stiff. (If you want lemon cream, just add a little zest and juice.)  Place the whipped cream in a piping bag with a tip and fill them from the bottom.  These are a little denser than spongy more like a Madeline, but I think I preferred this version, even though I certainly enjoyed trying the other versions I experimented with.

Note: I used a Wilton 230 tip to fill them, because it's longer and can be inserted from the side as well as bottom. Also on my bag when I use tips that I may want to change out I use a coupler, they are available where the tips are sold.  It makes things so much less messy.

Because these are filled with whipped cream you should store them in the fridge.