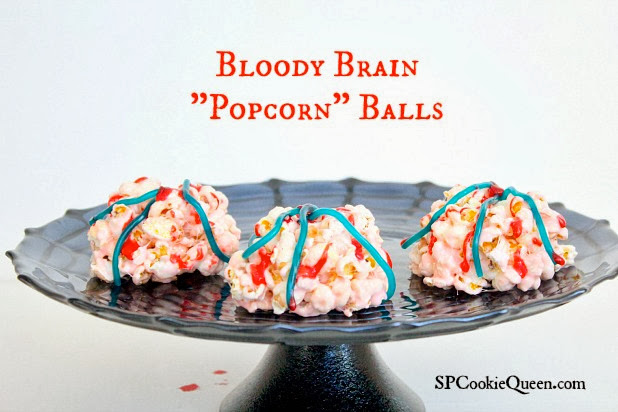 It's Monday, let's do the happy dance!  Honestly I have no idea who the nut job is who just said that is.  I would be happy if Monday never existed.  But I am excited to crank up the scary music and commence with the Halloween fun I've been having around here with these Bloody Brain Popcorn Balls I will be serving the little kids victims that are headed here this weekend.

First of all I'd like to know how I went all these years without eating brains.  Seriously, I got offered them almost every year from my father-in-law on New Years.  He would store the head of the pig he served on Christmas in the fridge until New Years and then would eat the cheek meat and brains.  Every year he'd offer me some of the brains and every year I'd pass.

Well you know what I had no idea what I was missing until I made some for myself.  I always kind of thought they would be mushy and have foreign particles in them.  Turns out I was all wrong.  I was just offered the wrong kind of brains.  Had he passed around the popcorn brains I'd have been all over them, probably would have went back for seconds and thirds.

Pop the kernels in hot oil, add a little salt.  Pour the popped corn leaving behind the un-popped kernels in a large bowl.

Melt the butter in a large saucepan on medium heat.  Add the marshmallows and stir until melted.  Add a very small amount of the pink food color.  Pour the brain goo over the popcorn and stir with a silicone spatula.

Spray a 1/2 cup measuring cup with no-stick spray and pack the cup with the popcorn mixture and un-mold onto a baking sheet lined with parchment paper.  I got about twenty brains.

Shape them with your greased fingers a bit into balls and place a straw down the center for a little separation between the two halves of the old cauliflower. 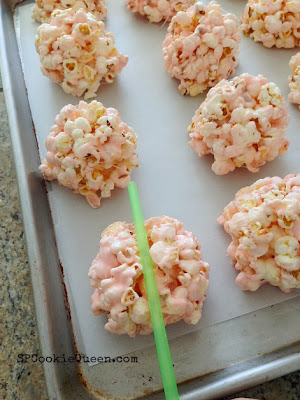 What fun would eating bloody brains be if you didn't have a few tasty bright colored veins running through them?  I found a couple different kinds to use. 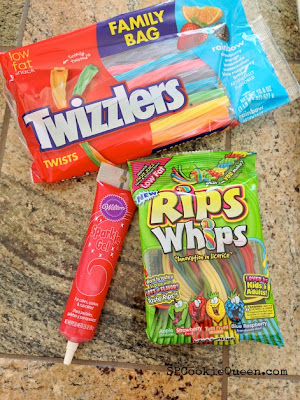 As for how bloody you'd like them, well that is completely up to you.  I prefer mine lightly hemorrhaging.  I also prefer a cup of tea to wash down my brains, but I am a bit odd like that. 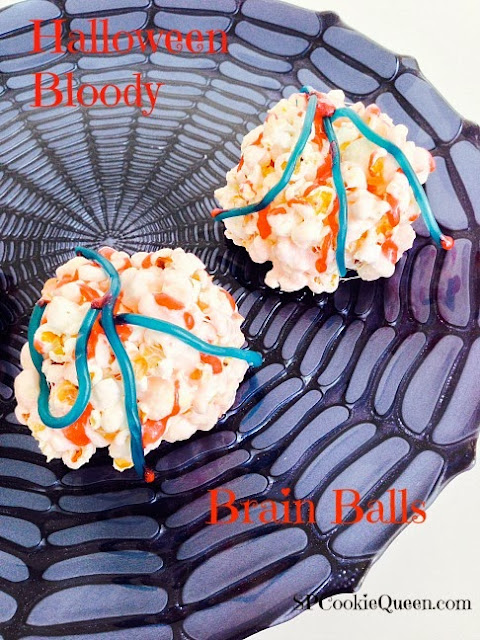 Ten more days to Halloween people, ten more days!  Sorry just had to get that out of my system.

The Spooky Queen (thanks Patty)

p.s.  I may have inadvertently turned Hot Dog Dude into a zombie by giving him brains.  I sent the leftovers with him to work, and he came home that night and said, "I need more brains" with a strange glazed over look in his eyes.