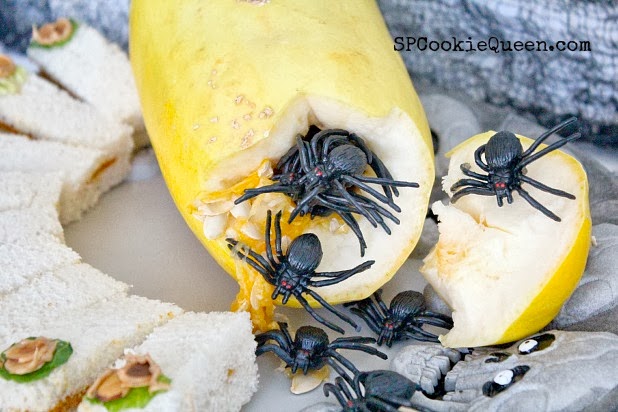 It's funny how when things go wrong they seem to spin a web that is out of control.  I had to run to the store at least a dozen times before I got all the items I needed for the Halloween recipes I was working on.  I'd forget something and have to run back, pull something out of the pantry and realize it was expired, or something much worse.

I decided I needed a little me time and treated myself to a spa mani and pedi at the nail shop in town that I visited a few weeks ago.  Sat down in one of their luxurious massage chairs and was doted on by a petite woman who kept asking me, "What color?"  Okay fine, "How about French", I replied.  She removed my finger nail polish with the finesse of a Hump Back Whale and then told me in her shrill voice, "I think you should pick green."  "I don't want green, I want French", I said. "Fine, but you already have green", she reported as she showed me my fingernails complete with inflamed cuticles and a raging fungal infection.  I knew I shouldn't have gone to a place just because they had free chips and salsa with each service.  Live and learn people, live and learn.

I figured well that has to be the worst thing that can happen to me this month.  I can work with green at least it matches my eyes. When I got home I decided to work on some appetizers for the Halloween party and when I was cutting open a spaghetti squash a swarm of angry spiders that had been building a nest inside came spewing out.  After I quit running around the house screaming, "God, take me now", I figured why not go with it as a centerpiece. 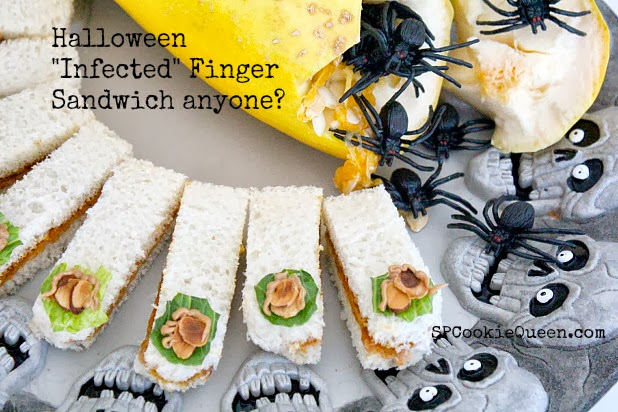 As for my fingers, one was so bad it had to be cut off but the remaining fingers were spread with a little peanut butter and pumpkin butter, crusts cut off, cut in three "fingers", topped with a small piece of romaine lettuce that was glued on with peanut butter, topped with infected (toasted almond) nails (with more p.b. glue), and given ragged, inflamed peanut butter cuticles. 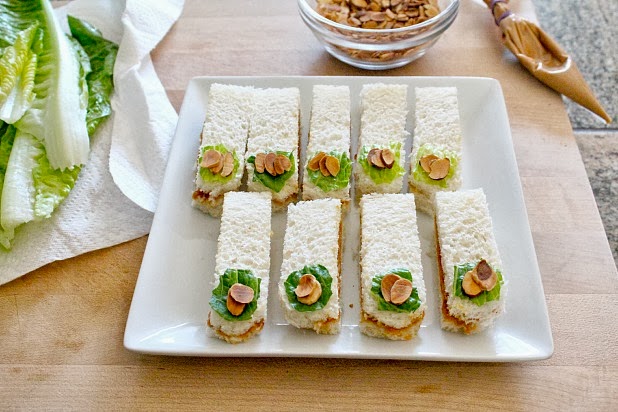 If you don't add the cuticle inflammation until serving you can make the sandwiches the night before and cover them with plastic wrap and store in the fridge. 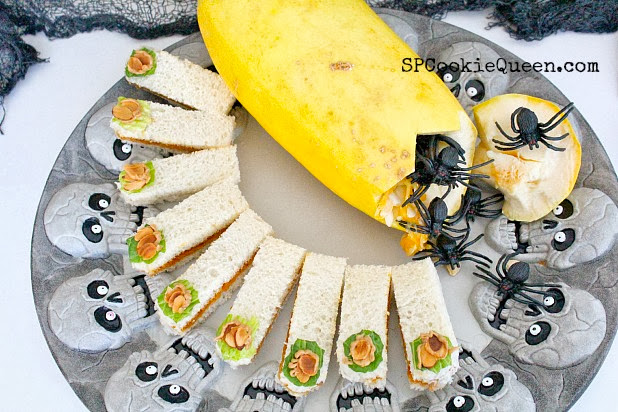 You know what, I didn't think I was going to enjoy ingesting "Infected" Finger Sandwiches, but actually they were pretty tasty and those crunchy infected nails added that little something-something to them.  I think maybe the only thing that could make them better would be to add some dried cockroaches to the sandwiches and I know just the nail salon that had plenty of them running loose.